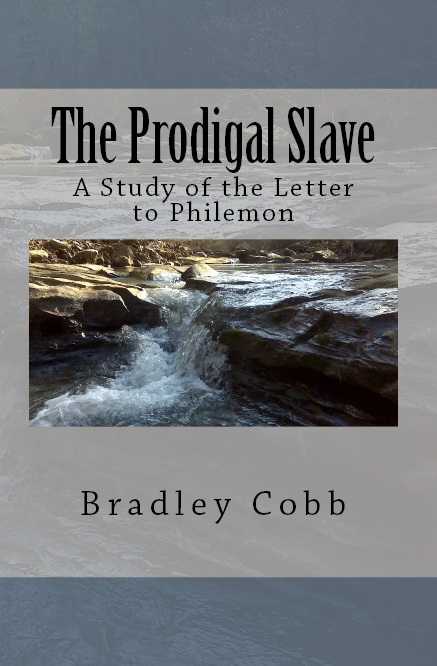 (The following is from the introduction to Philemon in “The Prodigal Slave: A Study of the Letter to Philemon” by Bradley S. Cobb)

Philemon owned at least one slave, a man named Onesimus.  It was because of this slave that the book which bears Philemon’s name was written.   This slave had run away and somehow found himself with the apostle Paul.  After a period of time, Paul sent Onesimus back to his master with this letter.  But why would a man of God send someone back to a life of slavery?

Because of the culture in which we live today, we have ideas about slavery that did not exist in the first century.  In the United States, slavery is generally viewed as inherently sinful.  The idea that one man can own another is repulsive to the vast majority of Americans.  However, the Bible never once condemns slavery.  The book of Philemon, along with Colossians (see 4:1), makes it clear that slavery is not sinful in and of itself.

By some estimates, there may have been as many as 60 million slaves in the Roman Empire during the first century.  This is even more shocking when you note that the whole of the Roman Empire numbered 120 million!  Regardless of the specific number, it is quite sufficient to say that slavery was a common practice throughout the Empire.  However, not all people became slaves in the same way.

Slaves literally became the property of their owners.  Think about owning a car.  If the car stops working well, you might decide to try to fix it, and if that does not work you might sell it or even have it crushed.  If a slave was not working as well as the master wanted, the master could try to correct him (possibly by talking with him, or by punishing him).  If that did not work, he might sell him to someone else, continue to beat him, or maybe even kill him.  If a slave was disobedient to his master or talked back, the master had full legal right to sell the slave’s wife and children as punishment.

It is also important to note that not all slaves were treated the same way.  Just as there is everywhere else, good and bad people exist.  There were forgiving masters, but there were also vicious masters.  Some slaves were treated kindly, others were beaten mercilessly.  Many masters would simply view the slave as an employee, like one might view a butler or a maid.  Others made the slaves the object of all of their anger and hatred.  After the Civil War, when Abraham Lincoln had abolished slavery in the US, there were some slaves who did not wish to leave their master’s house.  They stayed on because they had been treated well by their owners.

In the first century, slaves had the same rights as widows and orphans: none.  This is the life that Paul was sending Onesimus back into.  Would you be willing to go back?