David Lipscomb.  He was a gentleman and a true scholar.  He helped hold the church together, especially in the south, after the Civil War.  He helped to create the Gospel Advocate, and was its editor for decades.  He also helped found the Nashville Bible School (now David Lipscomb University).

In 1896, David Lipscomb published his commentary on Acts.  Before his death in 1917, Lipscomb had compiled his own commentary notes on the books of John, and all of Paul’s epistles (Romans through Philemon), but never published them because he believed they could be improved upon.  He requested that J.W. Shepherd, his dear friend, expand these notes and publish them.  Beginning in 1935, the David Lipscomb commentary collection began to see the light of day.

J.W. Shepherd took Lipscomb’s notes, but also went back and scoured through all of the articles that Lipscomb had written for the Gospel Advocate to find more material.  And, at the request of Lipscomb, Shepherd also added his own notes to “fill out” the commentaries on Paul’s epistles.  C.E.W. Dorris was chosen to expand the notes on John.

Then these commentaries were made available to the public.

Years have gone by, and these commentaries are still of great use!  This is why we have taken the time (well over 100 hours of work) to convert these wonderful commentaries into e-Sword format (as well as theWord, MySword, and e-Sword HD).

Seven volumes, 2110 pages of notes, all available in one very usable format.  We have taken great care to make sure the formatting is beneficial, that the spelling is correct, and as much as was possible, check to make sure the cross-references  were correct (if you find a mistake, please let us know).  Comments in italics were added by J.W. Shepherd (or C.E.W. Dorris in the book of John).

Look at the example below (Acts 2:38), and see for yourself.  Click on the image to enlarge it. 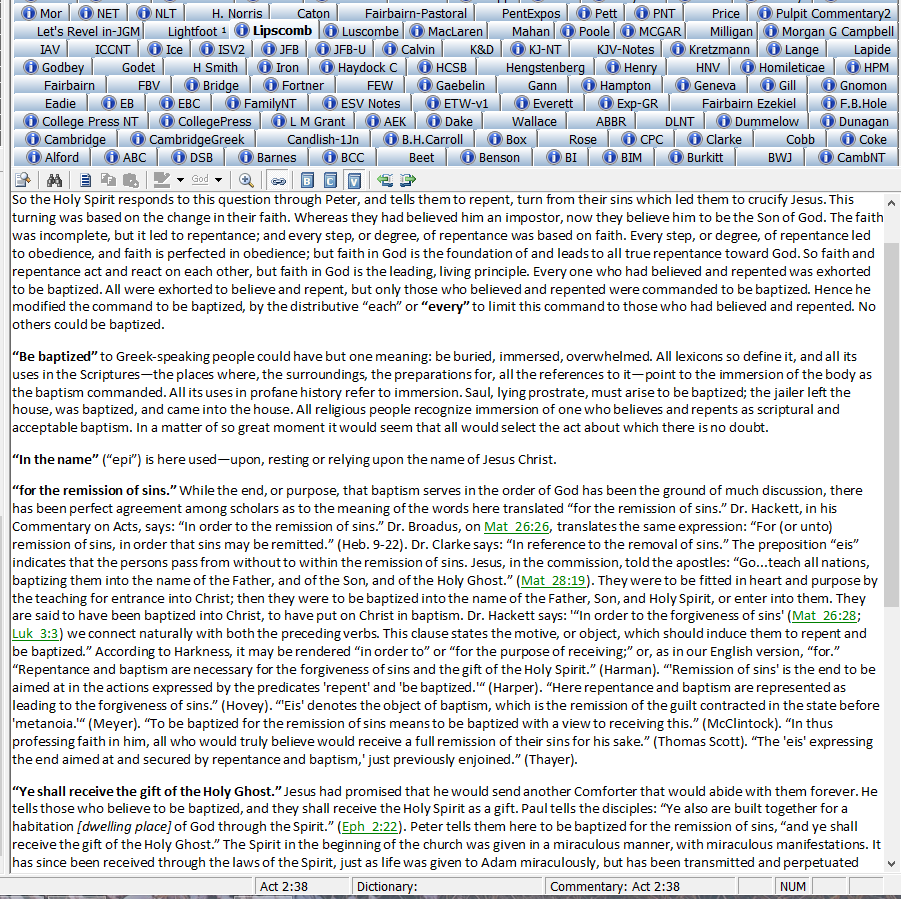 This collection is an absolute bargain!  Just $4.99 gets you the entire seven-volume set (that’s less than 72 cents per volume!).