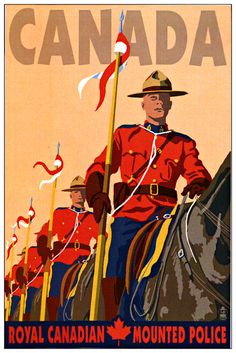 There are things that you expect, things you take for granted, things that you know to be true, which turn out to be completely wrong.  Here’s one of the things that I found out when we visited Canada earlier this month, something that was very unexpected:

I’m serious, they don’t.  That’s no surprise to Canadians, of course, but that was quite the surprise to me.  Maybe that is because I’m the person who learned everything he knows about Mounties from Due South.  I saw police cars and police (the R.C.M.P.) in them that looked like…well…regular police.  To say I was disappointed would be an understatement.  I had made it a goal to track down a Mountie and get my picture taken with him in his red uniform.  It didn’t happen.  See, they only wear those cool red uniforms for special occasions (parades, or anything else for show).  And it was just our luck that there were no special occasions while we were in the country.

But it got me thinking.  You see, there are a lot of people in the world and in denominations who we think we’ve got figured out.  We take it for granted that all Baptists believe a certain way.  We expect that any Catholic we run into is a Christmas/Easter Catholic.  We think we know certain things about them to be true.

But the fact is, we don’t know those things at all.  Each person is different, and while some things we think we know might be true, that doesn’t mean everything we think about them is true.

Why not take the time to get to know your religious neighbors individually and start talking with them about their beliefs.  I once spent thirty minutes waxing eloquent about the sin of instrumental music in worship to a Baptist.  If I had bothered asking their view on it first, I would have found out that their congregation was adamantly opposed to it as well.

This past week, I spoke to an Amish woman who was selling items in a store and asked her what her thoughts were on selling postcards with pictures of Amish people on it.  The common view among non-Amish (even among the people who are supposed “experts” who give tours of the area) is that the Amish refuse to have pictures taken because it is a “graven image.”  But this Amish woman told us that she (and many other Amish people) have no problem with the pictures, since they aren’t things being worshiped.  “They are just memories.”

It’s amazing what you find out when you look past your preconceived ideas and simply ask “what do you believe?”

But for the record, I am still disappointed that the Mounties don’t look like Mounties.