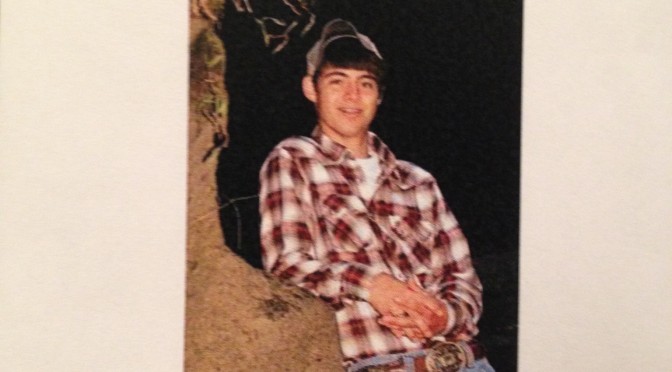 It’s hard to know what to say at a time like this.  Everything is going along like normal, you’re in a routine, and then your phone buzzes with a text message saying that your cousin, 21 years old, just died in a car wreck.  Shock sets in immediately.  And then the utter feeling of helplessness.

I loved Colby Miller, and his sudden death still has me seriously shaken up several days later, but I’m way down on the totem pole of people who were affected by his death.  He left behind him the love of his life, and a three-month-old son, devastated parents, a brother, a sister, grandparents, and various other extended family members who knew him much better than I (a side-effect of not living nearby).  The congregation in Wetaug, Illinois is hurting as well, and is still in shock.  It was evident in the words which were spoken yesterday (at both services), the eyes filled with sadness, the hugs that were freely given and held longer than normal, the feeling that no one really wanted to say “goodbye.”

But still, I feel the immense loss, the pain that is pervading the family, especially now as the wound is still fresh.  As Jesse and I left the graveside where they laid Colby next to his hero—his (and my) grandpa Don—I couldn’t help but notice names, names of people I have known, names of family members who I once talked with, smiled with, laughed with, and loved.  Half of my family history is buried in that cemetery.

The past few days have got me thinking hard about many things, and I hope that somehow, through this, I can … I don’t know, do something.  So, here goes.

Take the time to tell others that you love them.

As was painfully driven home to me this past week, you don’t know that you’ll ever see a loved one again.  Something might happen to you.  Something might happen to him or her.  Brad Paisley sang a song about writing a letter to his younger self, and it includes the line “P.S. Go hug Aunt Rita every chance you can.”  The implication being that she wasn’t alive anymore by the time he wrote.  Don’t wait to tell and show people that you love them, and don’t assume that you’ll have other opportunities.  You don’t know that.  Take the time, make the opportunity now to let people know you care.

Be a friend to others.

At the visitation for Colby, there was an unbroken line of people coming in for over five hours.  I don’t know the exact number, but it was over 700.  Some were friends of his parents, others were friends of Colby himself.  But make no mistake, these people came because of friendship.  Colby was a friend to many people, had an impact on the lives of many people.  I’ve seen funerals before where hardly anyone came because the deceased didn’t have many friends.  Christians, more than anyone else, should have an impact for good on the lives around them.  Think of all the opportunities you have to reach out to others, to help others, to be a friend to others.  Don’t waste your time—make it worthwhile in reaching others.

Colby was lost, on an unfamiliar road, trying to get somewhere.  But he was also in a hurry, and wasn’t able to make a turn.  It’s then that his truck left the road, and … well, I don’t want to go into what happened next, but it is what caused me to receive the text mentioned at the beginning of this post.  When we got to Illinois and joined with the family before the public visitation began, my grandmother (and Colby’s) hugged me harder than she’s ever hugged me before, and said “Don’t let this happen to you.”  She knew that I used to have a lead foot.  She was begging me to make sure I drove safely.

I could go into the truth that a Christian is to obey the laws of the land (including the speed limit), but I also want you to realize that these laws are there to help keep us safe.  It’s most likely that if everyone drove the speed limit, I wouldn’t be writing this today.  But now, every time a car passes us on the interstate, I see it crashing, and I find myself praying a silent prayer that it doesn’t happen.

There are people that care about you.  If for no other reason, drive safely for their sakes.

Colby’s family could really use your prayers right now.  It will be a very long time before they approach anything even close to “normal.”  The congregation of the Lord’s church in Wetaug, Illinois, could use your prayers as well.  This hit them very hard too.

In the meantime, don’t assume that you’ve got tomorrow to tell people that you care—do it now.  Don’t wait to give a hug, to make a visit, to pick up the phone and call, to show that you love them, or that you are their friend—do it now.

7 thoughts on “A Death Too Soon”