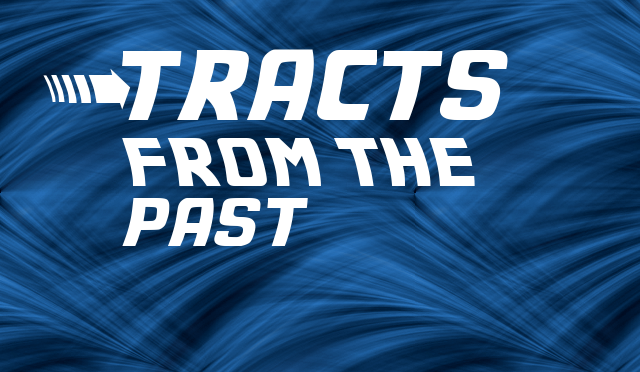 Greetings!  We hope that you have been finding F.W. Mattox’s work on “Christian Solutions to Modern Problems” to be interesting and challenging.  Today’s installment looks at–among other things–the assertion that the Bible endorses communism.

4. DOES CHRISTIANITY OFFER A PLAN FOR SOCIETY?

Karl Pollanyi, the Austrian economist, has criticized Christianity on the basis that it presents no over-all plan for society. He calls this the greatest blind spot in Christianity. His criticism is that it is entirely too individualistic; that it might have worked in former periods, but since there are so many people living in large groups, the Christian individualistic idealism does not apply.

I would answer this charge by saying that while Christ did not give us a detailed blueprint for the ideal society, which could have been applicable in only given localities, he instead left us underlying principles which will take root in any society and bring it to a more ideal state. All who have looked into the matter of law and studied its value are impressed with the fact that no system of regulations is more effective than the majority of the members of the society will support. In other words, laws and regulations, to be effective, must be supported by the majority of the members of the society involved. This means that had Christ given the ideal social order, it would never have been effective until the majority in any society would support it as individuals.

Instead of approaching it from this angle, Christ gave plans that will build in the individual social responsibility and ideals of conduct that would make him the ideal citizen in any form of society. Not only does Christianity build into each individual heart the highest social responsibility; it requires that each individual be a missionary of these ideals to such an extent that each will use his power and influence in developing in others the same responsibility and noble principles of conduct. This plan is far more effective than any attempt would have been to require a perfect social order.

Not only is this a better plan ideally, but it is the only plan that could work from the practical point of view. If Jesus had advocated a perfect social order, it would have meant there would be outward opposition by his followers against all opposing orders and thus have caused social upheaval in the Roman Empire as well as in all subsequent times. But by working through the individual, each order is gradually improved as the principles of Christ are accepted.

As Pollanyi has criticized Christianity for having no over-all plan for society, others have claimed that Christianity endorses Communism. Accordingly, the adherents of such an idea say that the Communistic philosophy is in harmony with the Christian religion. This definitely is a mistaken idea. The passages of scripture that are used to prove such a claim are passages in the Book of Acts telling of the church in Jerusalem.

In Acts, 2:44, the scripture says, “And all that believed were together and had all things common and they sold their possessions and goods and parted them to all accordingly as any man had need.” Again in the 4th chapter, and the 32nd verse, it reads, “And the multitude of them that believed were of one heart and soul: and not one of them said that aught of the things which he possessed was his own: but they had all things common . . . for neither was there among them any that lacked: for as many as were possessors of lands or houses sold them, and brought the prices of the things that were sold, and laid them at the apostles’ feet: and distribution was made unto each, according as any had need.”

These passages of scripture in no way endorse the Communistic philosophy, but rather, are statements of the unselfishness that Jesus taught in regard to Christians sharing with others when occasion demanded.

There is a great difference in Christian sharing and Communism. In Communism, the state takes over all of the property, even by force, and it is controlled by a small minority, theoretically for the good of all. Communism would take all wealth from all individuals. This is not what we have read in the above passages of scripture. Those who sold lands and possessions, sold them voluntarily and gave their money voluntarily to the apostles and this money was distributed, not equally to all who were Christians, but only to those who were in need.

Not only is this true, but we have the record of those who did not sell their possessions in the church at Jerusalem.

An outstanding example of this is Mary, the mother of John Mark, who owned a large home in the city of Jerusalem, which was used as a meeting place for many of the Christians. (Acts 12:12-14.) Further evidence is the fact that the Apostle Paul in his instructions to Christians in their giving, laid down the plan that each is to give as he has prospered. (I Cor. 16:2.) This clearly indicates that there were differences in prosperity.

This also indicates that the New Testament scripture does not demand equality of possession. Jesus said, “The poor will be with you always.” This, by no means, however, should be taken as a sanction of poverty but rather it is an indication that no matter what a person’s financial status, he is responsible for helping his fellow man. The conclusion is very strong that the New Testament scripture does not sanction in any of its plans, a Communistic set-up such as is being advocated today. The scripture does set forth very strongly the idea of individual responsibility and one of the greatest weaknesses of any Communistic development is the elimination of responsibility on the part of the many and the assuming of complete direction in the hands of the few.

We have had it good for a very long time. You don’t believe me? Name one Christian in America who has been murdered because he stood for his faith. Can’t think of any? How about naming a Christian in America who was beaten by order of the government? We’ve had it so good that we are actually shocked and outraged when the government does something that might cause us to suffer in some way.

To put it bluntly, we have become spoiled.

Is it horrible that the Supreme Court has made decisions that go against the Bible? Is it infuriating when the president forcefully promotes homosexuality?  Of course. But since when is it the government’s job to determine what is biblically right or wrong?

It would benefit all Christians to have a history lesson.

And we complain about the itty-bitty persecution we’re getting here in America? Really?

Let every soul be subject to the higher authorities, for there is no authority except from God. The powers that exist are ordained by God. Therefore, whoever resists the authority resists the ordinance of God, and those who resist will themselves receive damnation. (Romans 13:1-2)

It was also during the reign of Nero that Paul said:

Therefore, I exhort that—first of all—supplications, prayers, intercessions, and giving of thanks be made for all people, for kings, and for all those in authority (I Timothy 2:1-2).

I can hear it now, I’m supposed to thank God for the corrupt and wicked leaders we have?!?!?

Do you think Paul and Peter were just kidding when they said to honor Nero? To be subject to Nero? To not resist Nero? To pray and give thanks for Nero?

It’s time to realize that even as bad as things may be, they could be worse—a lot worse.

If you want this county’s direction to change, then you have to start changing the people. That’s not done through legislation, but through teaching them the true gospel of Christ.