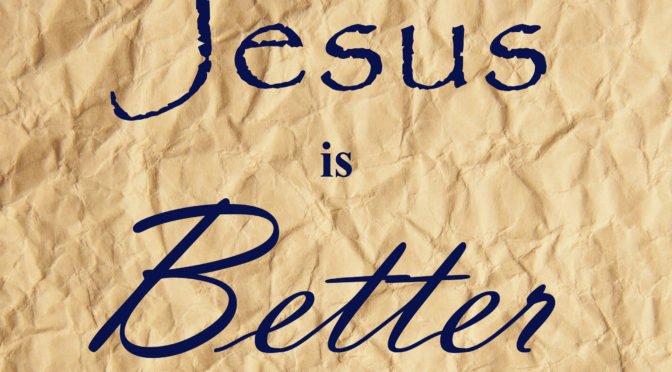 In the midst of discussing the ways in which Jesus is superior to angels, Old Testament leaders, and the entire Old Testament religious system, a statement is made that shows the absolute supremacy of Jesus over anyone else in history.  Of course, that is perhaps the main theme of the entire book of Hebrews, but it is nowhere stated more succinctly than in Hebrews 5:9.

And being made perfect, He became the author of eternal salvation to all them that obey Him.

“Salvation” in the Old Testament.

The inspired penman writes to religious Jews, men and women who were very aware of their proud (and sometimes not-so-proud) history as a nation.  As people well-versed in the Old Testament scriptures, they understood certain words and phrases in specific ways.  For many of them, it was difficult to comprehend that some of the Old Testament prophecies were talking about things spiritual instead of literal.  This is likely true of the word “salvation.”

Throughout the Old Testament, the words “saved” and “salvation” almost always refer to some kind of physical salvation, whether it be deliverance from sickness (like Hezekiah, Isaiah 38:20), from barrenness (like Hannah, 1 Samuel 2:1), or from enemies (most other places in the Old Testament).  Even Joel 2:32, which was quoted by Peter on the Day of Pentecost, if you look at the context of that prophetic book, had every appearance of a physical deliverance.  It indeed included that idea, but these were mere shadows of the greater salvation that was coming.

Read these passages, which are just a sampling, and see for yourself what the primary type of salvation was in the Old Testament.  When the Israelites were standing on the shores of the Red Sea, the Egyptians hot on their heels, scared that they were going to be killed, Moses said:

Fear ye not, stand still, and see the salvation of the Lord, which He will show to you today: for the Egyptians whom you have seen today, you shall see them again no more forever! (Exodus 14:13).

After Moses raised his rod, the Red Sea split, and the Israelites walked across on dry ground.  When the Egyptians tried to follow them, God brought the walls of water crashing down on them, drowning Pharaoh’s entire army.  The inspired record then says:

Thus the LORD saved Israel that day out of the hand of the Egyptians; and Israel saw the Egyptians dead on the seashore (Exodus 14:30).

Forty years later, the Israelites are at the side of another body of water, the Jordan River, and Moses is giving a series of sermons, delivering to this new generation the laws and commands of God, as well as the promises.  Hear what he says to them:

It shall be, when you are come night unto the battle, that the priest shall approach and speak unto the people, and shall say to them, “Hear, O Israel, you approach this day unto the battle against your enemies: let not your hearts faint, fear not, and do not tremble, neither be ye terrified because of them; for the LORD your God is He that goes with you, to fight for you against your enemies, to save you” (Deuteronomy 20:2-4).

This is the same thread that runs throughout the books of history.  Judges 6 and 7 uses the word several times to describe the salvation that God would bring to Israel by the hands of Gideon and his 300 men.  Salvation from the Philistines is mentioned several times in the books of Samuel.  Here’s just one of those passages:

In the books of Kings and Chronicles, there are instances of the people going to God in prayer, crying “Save us!”  But these are all asking for physical salvation from their enemies.

Now therefore, O LORD our God, I beseech Thee, save Thou us out of his hand, that all the kingdoms of the earth may know that Thou art the LORD God, even Thou only (2 Kings 19:19).

What we need to recognize in all of these is that they weren’t asking for salvation from sin; they were asking for physical deliverance from their enemies.  But make no mistake about it, there was a spiritual component to this as well, as we will see.

Old Testament Salvation Based on their Attitudes and Actions

In the book of Judges, we see over and over the rollercoaster of the Israelites—they go from faithful to fallen, then God sends a nation to conquer them.  Eventually, they cry out to the Lord in repentance, and God sends a deliverer, a judge, to save them from their enemies.  In short, God didn’t save them when they continually rejected Him.  This is a constant theme throughout the entire Bible (Old Testament and New Testament).  If you doubt it, just read Hebrews 10:26-31.  Moses, soon before his death, told the Israelites that they needed to learn the lesson of faithfulness:

It shall come to pass, if thou wilt not hearken to the voice of the LORD thy God, to observe to do all His commandments and His statutes which I command thee this day, that all these curses shall come upon thee and overtake thee. … And thou shalt grope at noonday as the blind gropeth in darkness, and thou shalt not prosper in thy ways: and thou shalt be only oppressed and spoiled evermore, and no man [literally, “no one”] shall save thee (Deuteronomy 28:15, 29).

Obedience was required if they wanted physical salvation.  But so was humility.  After David had been saved from Saul (The king of God’s people, the Israelites), he was inspired to write:

The afflicted people [“humble people,” NKJV] You will save, but Your eyes are upon the haughty, that You may bring them down (2 Samuel 22:28).

Here is a contrast being made between two people who are in a covenant with God.  On one hand, you’ve got the mighty King Saul, the haughty, high-minded King Saul.  On the other hand, you’ve got the humble servant of God, David.  Being saved physically in the Old Testament was based on one’s attitude towards God.  And brethren, our salvation today is based on our attitude of humility as well—

Humble yourselves in the sight of the Lord, and He will lift you up (James 4:10).

The sixth Psalm shows the heart of a humble person before God, including these words:

When David’s son Solomon went before the people after the completion of the magnificent temple in Jerusalem, he preached to them and offered a public prayer to God.  In it, he showed the connection between their physical deliverance and their spiritual condition.  Hear his words:

If they sin against You (for there is no man which does not sin), and You be angry with them, and deliver them over before their enemies, and they carry them away captives unto a land far off or near.  Yet if they consider themselves in the land to which they are carried captive, and turn and pray to You in the land of their captivity, saying, “We have sinned, we have done amiss, and have dealt wickedly”; if they return to You with all their heart and all their soul in the land of their captivity to which they have been carried captives, and pray toward their land which You have given to their fathers, and toward the city which You have chosen, and toward the house which I have built for thy name; then hear from the heavens, even from Your dwelling place, their prayer and their supplications, and maintain their cause, and forgive Your people which have sinned against You (2 Chronicles 6:36-39).

Without any doubt, the lost people of God, in order to expect salvation, had to repent of their sins against God.  It was a requirement for their salvation.  In short, for them to expect a physical salvation, they had to obey the Lord.

The writer of Hebrews shows that Jesus’ priesthood is a God-ordained one (Hebrews 5:4-6).  Just as Aaron was called by God to be a priest, so was Jesus.  But the priesthood of Jesus Christ was different, was superior to the Levitical one.  Aaron’s high-priesthood ended at his death, and the next priest was his son—and so it continued more or less for some 1500 years.  But Jesus’ role as high-priest is “forever,” and began at His death, when He offered Himself as the ultimate sacrifice for sin.  Additionally, Aaron (and his sons) required the assistance of another human (Moses) to ordain them to serve as priests.  Jesus was ordained straight from the Father, without any human go-between.

Given the focus of this lesson, we must point out that while Aaron was able to offer sacrifices for the sins of the people, Aaron didn’t originate this system.  He simply followed the instructions given to him by Moses (who received them from God).  By way of immense contrast, Jesus is the Author, the Originator, the Cause of eternal salvation.

The salvation offered by Jesus is also universal in availability.  The inspired writer doesn’t say “He is the author of eternal salvation to all the Jews who obey Him.”  It is for all—Jew and Gentile alike (Acts 10-11).

Our Messiah’s sacrifice of Himself for us was a one-time act, not something that had to be done every day (Hebrews 7:27; 10:1-2).  It was not a sacrifice which led to temporary salvation, which was lost upon each subsequent sin (requiring yet another sacrifice).  The Sacrifice of our Sovereign is one which leads to eternal salvation.  His salvation doesn’t require another sacrifice to purge or cleanse sin from His followers; His sacrifice continually cleanses us from sin if we walk in the light (1 John 1:7).  In other words, salvation through Jesus is better than salvation under the Old Testament sacrificial system.

Make no mistake about it, there was forgiveness of sins offered in the Old Testament (see 2 Chronicles 6:39, Psalm 51).  But it, like so much else, was a shadow, which needed the reality of Jesus the Messiah to give it meaning and effectiveness.  The sins of the Old Testament saints were forgiven based on the then-future sacrifice of the Majestic Messiah (Hebrews 9:15).  The sins of the New Testament saints are forgiven based on the death of the Suffering Savior (Acts 2:36-38; 1 John 1:7).  The salvation from sins offered under the Old Testament was one which required faith in something that most of them would never see in their lifetime.  Salvation under the New Testament is based on something that has now actually taken place. It is much like Peter’s words to the church: “We have a more certain word of prophecy” (2 Peter 1:19).

Father, grant us that eternal salvation, which is far superior to physical deliverance from enemies, and which is certain and solidified for us through the death of Your Son, Jesus the Savior.