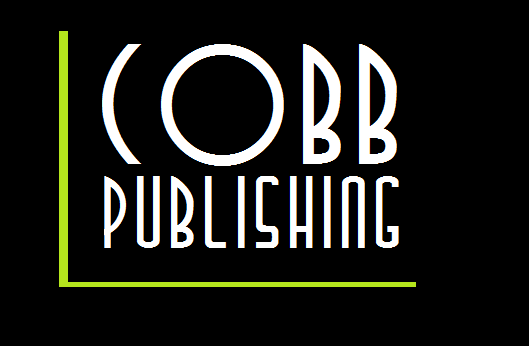 It’s been months in the making, but our latest book, The Holy Spirit in the Book of Acts is just about done.  We believe that you will find it to be a worthwhile and valuable resource.

This book came about because of the wrangling that is done throughout the church over the issue of the Holy Spirit, His work, and how various passages in Acts are used or misused in an effort to prove each side’s arguments.

Coming in at just over 200 pages, this book is easy to read and understand, but it is in-depth, and backs up its conclusions with careful Bible examination.  Unlike some books which attempt to tell you what to believe on the issue, this one attempts to prove from the Scriptures what the proper belief is.

Issues covered in the book include:

We do hope that you will consider checking the book out.  Look for it (Lord willing) by the end of this month!

We are proud to announce the latest book from Cobb Publishing is now available! 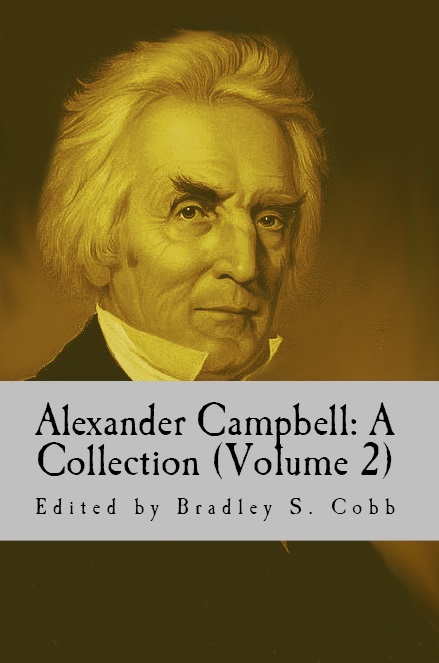 While about half of the previous volume was about Campbell, with the other half being some of his writings, this volume is almost all him.  There is a very brief biography of Campbell to start off the collection, and then the spotlight shines on Campbell’s pen.

In this brand-new collection, you can read his famous “Sermon on the Law,” get his thoughts on instrumental music in the church, find out what he has to say about the Bible and capital punishment, and even see his own translation of the book of Acts.  This book contains over 300 pages of material for your enjoyment and edification.

We have spent well over 100 hours in selecting, proofreading, and formatting this book to give you the best possible reading experience.  We believe it was worth the effort, and after seeing it, we think you’ll agree!

However, for the first week (that is, until next Monday), we will be offering a special price of $7.99 for the paperback, and $1.99 for the eBook!  Click here to order it from us directly.

And may your day be full of God’s blessings!

First and foremost, we want to say a great big humongous THANK YOU to all of our readers.  This past week was amazing, and it’s thanks to you!

Twelve days ago, we set a new record for our site.  The sermon on Hell was shared on Facebook 35 times, which was the most of anything we’ve ever posted.  I realize that for some websites, that’s a disappointing number, but we’re still growing.

But that didn’t even come close to preparing us for the response to this past Friday’s article on the “thousand year reign of Jesus on earth.”  As of Sunday evening, it had been shared 124 times!  That’s more than three  times the record-setting mark from the week before.

I realize that this information might seem meaningless to you, but it is something that excited us.  We are humbled that so many of you found that article helpful and worth sharing.  So, all of this is to say this:

We’ve also got a lot of new readers the past couple weeks (probably due to those two articles), and we’d like to take a moment to tell you about the other good things you’ll find on our website.

Our Friday Bible Q&A articles seem to be people’s favorites.  We try to answer each question sent our way in a logical, easy-to-understand way, but most importantly in a biblical way.  All of our Bible Q&A articles can be read here (or by clicking “Bible Q&A” at the top of our website).

In addition to writing articles, we also produce a lot of books.  We’ve got books about the Restoration Movement, debate books, sermon collections, as well as our own line of in-depth but easy-to-understand commentaries.  These books are available in paperback and eBook format (and if you use Kindle, they’re all available at Amazon.com too).  Click on “shop” at the top of the page to see everything we’ve got available.

We’ve got a few projects currently in production that we hope will be worth the wait, The Holy Spirit in the Book of Acts, Alexander Campbell: A Collection (Volume 2), as well as others.

If you like to smile, then check out the Cobb Kids Audio Show.  Our four kids (and some other relatives) had put together several episodes of their own home-made “old time radio show.”  Complete with sound effects, laugh tracks, and (sort of) commercials, these shows are guaranteed to make you smile.

The Book of Revelation

Over a thousand hours of work went into putting together this collection of 48 sermons covering the entire book of Revelation.  The first three lessons, which introduce the study, can be downloaded from our Revelation page.  After reading them, if you want, you can purchase the entire collection (with powerpoints and handouts) for less than $10.  In fact, until the end of the month, it’s only $5.00.

If you use e-Sword, then you’ll want to check out our exclusive e-Sword files.  And if you want more, go to the Gravel Hill church of Christ website (which we also take care of).

And there’s plenty more.  Just take a few minutes and look around!

Thank you once more.  We truly appreciate you. 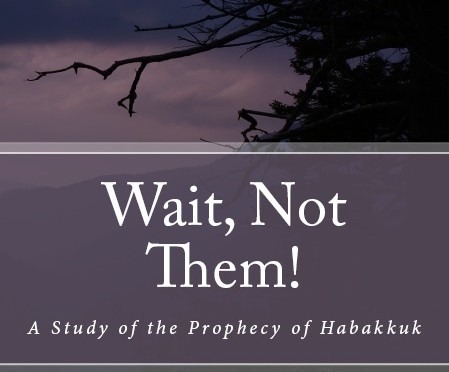 To celebrate the release of our latest book, Wait, Not THEM!  A Study of the Prophecy of Habakkuk, we are going to give you a sneak peak–a just-for-you look at the introduction of the book.

But before we do, let me take just a few seconds to tell you about what’s in the book.

It was written to be helpful to both the new Christian as well as the one who has been involved in Bible study and teaching for decades.

What others have said about this book:

Now, without further talking, here is the…

Habakkuk is among the most overlooked and ignored books of the Bible. Perhaps this is because it’s so short. Perhaps it’s because there really isn’t a clear prophecy of Jesus Christ in the book. Perhaps it’s because it doesn’t have any action or stories in it (like Jonah). Whatever the reasons may be, this book hasn’t gotten the attention it deserves. After all, it is Scripture, and all Scripture is given by inspiration of God and is profitable (II Timothy 3:16).

The writer is the prophet Habakkuk. The book is described as the “burden” (or prophecy) which Habakkuk saw (1:1). Someone might rightfully ask, “Couldn’t someone else have written it, just describing what Habakkuk saw?” That might be a possibility, except that the writer claims to be the one who received the prophecy. The writer says, “And the LORD answered me…” (2:2). Also, at the end of the book, the writer says “When I heard, my belly trembled; my lips quivered at the voice; rottenness entered into my bones, and I trembled in myself…” (3:16). This shows that the author is the one who received the prophecy. He identifies himself as the prophet Habakkuk (1:1).

Outside of this book, there is no biblical information about Habakkuk.

Habakkuk’s name comes from a word that means “to embrace.” So, it appears that his name carries the idea of “one who embraces” or “one who clings.” In the end of the book, Habakkuk is still clinging to God even in the face of the impending destruction.

Some have suggested that he was a professional prophet, because he identifies himself as “Habakkuk the prophet” (1:1). There were those who, like Elijah or Samuel, were known to be prophets and who made their living by the offerings of the people (see I Samuel 9:6-9).

Others have also suggested that Habakkuk was a priest of God, a Levite who served in the temple worship. This suggestion is based on the final verse of the book, which says “to the chief singer on my stringed instruments” (3:19). Both of these suggestions are possible, though they cannot be definitively proven.

Because of the content of Habakkuk’s prophecy, we can know for certain that he was a resident of Judea (see 1:2-4). We can know that it was written prior to Babylon’s invasion of Jerusalem in 606 BC (which was prophesied in 1:6-11). Beyond that, there is little we can discern.

There is one noteworthy mention of Habakkuk outside of the Scriptures. In the Apocrypha[1], there are two additional chapters to the book of Daniel. One of these chapters is referred to as Bel and the Dragon. In this story, Daniel (who is in Babylon) is thrown into the lion’s den (chronologically, this would have been immediately after the famous lion’s den episode of Daniel 6). In the lion’s den, Daniel is starving. So, in order to make sure Daniel doesn’t starve to death, the Angel of the LORD goes to Judea and tells Habakkuk to go feed Daniel. Habakkuk had just made some soup, and is told, “Carry the soup to Daniel who is in a lion’s den in Babylon.” Habakkuk replies, “I’ve never been to Babylon, and I don’t know where this den would be.” So, the Angel of the LORD grabs Habakkuk by the hair, and flies him to Babylon so he could feed Daniel. Then he grabs him again by the hair and flies him back to Judea.[2]

As you can hopefully see, that information is ridiculous, and gives us no reliable information about Habakkuk.

When Was it Written?

The only thing we can say about the date with absolute certainty is that it was written prior to the invasion of Judea by the Babylonians in 606 BC. The invasion is prophesied as a future event by God in 1:5-11. In 1:5, God says that it will happen in “your days,” meaning during the days of the people then living.

We can be a bit clearer with the date based on Habakkuk’s reaction to God’s announcement. God announces that the Chaldeans (the Babylonians) were going to attack. Habakkuk was extremely familiar with them (1:12-17). Babylon wasn’t really a world-power until around 615. They took and destroyed Nineveh, the capitol of the Assyrian Empire, in 612 BC. This seems to point to a date of 615-612 BC at the earliest.

We can narrow it down a bit more when we see the spiritual condition of the land. According to 1:2-4, the entire nation was wicked to the point where God’s prophet is calling for divine intervention. Josiah had reformed the nation, bringing them back into compliance with God’s word. However, after Josiah died in 609 BC, the nation went downhill fast. The king, Jechoniah, was ready to kill Jeremiah for prophesying.

Based on this information, it appears that we can date Habakkuk’s writing to be between 609 and 607 BC. This would place Habakkuk as a contemporary with Jeremiah.

Who Was it Written To?

Why Was it Written?

Ted Clarke stated it this way:

The ultimate purpose of Habakkuk’s prophecy was to show the grand truths that the just shall live by faith, and that the wicked will not go unpunished.[3]

Most of chapter two deals with the reasons for Babylon’s eventual destruction, but these reasons also apply to Jerusalem, and show that it deserved destruction as well. Babylon and Jerusalem are equated in that section. They are also equated in the book of Revelation (Jerusalem being the “Babylon” mentioned there).

This commentary uses the King James Version as its basis, though we have taken the liberty to update the spelling and language slightly (for example: didst is now did) to make it more reader-friendly.

[1] These are additional books and chapters accepted as part of the Old Testament by the Catholic Church. They never appear in Hebrew Old Testament manuscripts, but only in Greek copies. The Jews never accepted these books and extra chapters as inspired, and none of these writings were ever referenced by the New Testament writers.