Well, first off, we need to remember that as God is light, and in Him is no darkness at all (1 John 1:5), Satan is the opposite—a murderer from the beginning (John 8:44).  Because his very nature is sin, everything he does is opposed to God and God’s people.  The word translated “wiles” or “schemes” in Ephesians 6:11 is the Greek word methodeia—methods.  All of Satan’s methods are evil, they are parts of his attempts to devour the followers of God.  And since all of his methods are evil, we need to be constantly on guard.  NOTHING that Satan says or does will help us or do us anything but harm.

Satan, by nature, is wiley, a schemer, a creature with only evil methods designed to harm us.  Praise God that He has provided us with His armor to protect us! 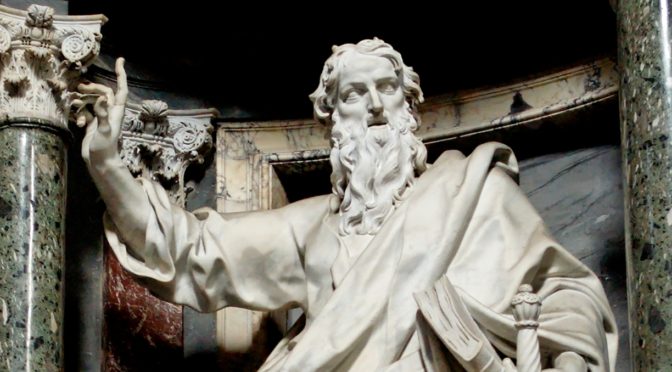 When relating his former life as a persecutor of the church of Christ, the Apostle Paul describes himself as “a blasphemer…persecutor…injurious” to the cause of Christ (1 Timothy 1:13).  The original word translated “injurious” (KJV) or “insolent” (NKJV) is hubristes.

In English, the word hubris means “the excessive pride and ambition that usually leads to the downfall of a hero in classical tragedy.”  It is interesting that Paul’s hubris as an enemy of Christ led to his downfall as a Jewish hero.  He spoke boldly against Christ, and Christ triumphed.  Is it any wonder that Paul said that he counted his past life as rubbish? (Philippians 3).

Angels!  They have fascinated the mind and imagination of believers for millennia.  Elaborate schemes of angelic hierarchy are popular in some denominations.  One of these beings in particular is mentioned by name multiple times in the Scriptures.  His name is Michael.

Putting all this together, Michael is the highest messenger of God, who is as God, who is the great ruler of Israel, who would defeat Satan and bring about the kingdom of God, whose voice will be heard when the judgment comes.

He’s a lot more important that we might usually think!

But Jesus, while on earth, was also a human.  He frequently identified Himself as “the Son of man,” or more literally, “the Son of a human.”  You’re probably more familiar with this Greek term (almost always translated as “man” or “men” in the New Testament)—it is anthropos (as in anthropology).

But now Jesus is in heaven at the right hand of the throne of God.  So, is Jesus still “man” in either way?  2 Corinthians 11:2, Paul tells the church that he has espoused (betrothed) them to one “husband,” Jesus Christ.  The Greek word there is aner, a male.  So Jesus is still described as a “man” in that way, even though He is in heaven.  But what might surprise you is 1 Timothy 2:5: “There is one God, and one mediator between God and men, the man Christ Jesus.”  In this verse, Paul describes the current role of Jesus as Mediator in heaven.  And there, by inspiration, Paul says Jesus is human (anthropos).  Jesus, though ascended and glorified in heaven, still retains His humanity so He can be our perfect mediator with the Father.

There is debate among Biblical scholars over Judas Iscariot.  I’m not talking about those goofy people who believe that Judas was somehow Jesus’ “chosen one” who was hand-selected by Christ to carry out God’s plan (as seen in the ridiculous 2nd century forgery, the Gospel of Judas).  I’m talking about those who believe in the inspiration of the Bible.  This debate deals with the question, “What does Iscariot mean?”

There are generally two schools of thought on this one.  The predominant view (overwhelmingly so) is that it means “Man from Kerioth,” which is a town in Judah.  If indeed this is the case, then it is proof that Judas was the only one of the apostles who wasn’t from Galilee (see Acts 2).

But, there is another possibility, and it is something that you might never have expected.  Some believe that Iscariot means “member of the Sicarii.” Now I’m sure you’re wondering, What is the Sicarii?  The Sicarii was a sect of the Jews, the most extreme of the Zealots (Simon was a Zealot).  These extremists prided themselves on their assassinations of Roman officials, Roman nobility, and prominent Roman sympathizers.  They would murder these people in broad daylight, among crowds, that way by the time the victim fell to the ground, they were lost in the crowd.  In fact, it was the growth of these actions that later led to the Roman-Jewish War that left Jerusalem in ruins and 1.1 million Jews dead.

And if Judas was one of these kind of men, it puts a whole new twist on his actions.  It is a possibility.

Nehemiah, the cup-bearer of Persian King Artaxerxes, was upset because he had heard about the Jews who had gone back to Judea being persecuted, and about the wall around the city being broken down.  The king saw he was sad, asked what was wrong, and when Nehemiah told him, the king responded, “What is it that you desire?”

When Nehemiah told him he wanted to go to Jerusalem to help rebuild the wall, the king, it seems, didn’t blink, but asked, “How long are you going to be gone?”  The king also sent letters of passage, and letters of permission to log the forests to rebuild the gates, walls, and a house.  Additionally, he sent soldiers with Nehemiah.  The question is Why would Artaxerxes care about the city wall of a conquered people?

The answer is this.  Queen Esther was married to Ahasuerus, King of Persia.  Ahasuerus is more well-known by the name Xerxes. During the days of Nehemiah, the Persian king was Artaxerxes—literally the son of Xerxes.  Artaxerxes cared about the Jewish people and their city because his mother (or step-mother) was Queen Esther—a Jew.  In other words, he cared because the Jews were family to him.

One of the joys of using the King James Version is those dreaded thees and thous that everyone seems to hate so much.  But they’re actually quite helpful in understanding what is going on in some Bible passages.  Here’s an example.

And the Lord said, Simon, Simon, behold, Satan hath desired to have you, that he may sift you as wheat: But I have prayed for thee, that thy faith fail not… (Luke 22:31-32).

When the words “you” and “ye” appear in the King James Version, it shows that the original language is plural, a group of people.  The words “thee” and “thou” (and “thy”) indicate a single person being spoken to.  This is a distinction that is missing from almost all modern translations.  Taking that knowledge, let’s look at that passage again:

And the Lord said, Simon, Simon, behold, Satan hath desired to have you [apostles], that he may sift you [apostles] as wheat: But I have prayed for thee [Peter], that thy [Peter’s] faith fail not…

Jesus didn’t pray for all the apostles in the face of Satan’s impending attack on them.  He prayed for Peter, that Peter’s faith would not fail.

It is interesting how many times the same words are used in Greek and Hebrew, but our English translations don’t bring it out.  Here’s one such example.

The Israelites are whiners.  Plain and simple.  And then finally God has enough of their nonsense, and sends fiery serpents among them, and those serpents start biting the Israelites, and people die.  Then they realize “Oh, we messed up!” and beg for Moses to do something about it.  So, Moses talks to God, and God tells him to make a brass serpent and put it on a pole.  Right?  Well, sort of.

The exact same word translated “pole” in Numbers 21 is translated as “sign” just five chapters later.  You might remember that Korah and company tried to rebel and overthrow Moses’ leadership.  Then Moses called for the ground to open up and swallow Korah and his crew alive.  It happened, and God said that this was done as a sign to the people.

The word in Hebrew almost always refers to something done or raised for others to see.  It is called a standard (a.k.a., battle flag), an ensign (a.k.a. flag of conquest), or a banner (you’re noticing a trend here, right?).

God told Moses not just to put the snake up on a pole, but to put it on a sign, raise it up for people to see the power of God, who through the snakes had declared war on the complaining Israelites.  The brazen serpent served as God’s battle flag.

If you ask people—even Christians who read their Bible every day—to identify the biblical writers, they would probably all agree that the Bible (at least the Old Testament) was written by Israelites (which, today, is used synonymously with the word “Jew”).  Most Bible scholars will point out that Luke was probably a Gentile, but the near-unanimous opinion of all is that the Old Testament was written exclusively by Israelites.

While that’s true for the most part, there is one chapter that wasn’t written by an Israelite at all.  And it is an inspired message from God.

To make it even more interesting, in many ancient copies of the book, this chapter is not written in Hebrew, but in the Chaldee language—the language of Babylon.

So, if someone ever asks you about the writers of the Bible, don’t forget to add that formerly heathen king who learned his lesson by being sent out to pasture (literally) by God.

When Paul works his way backwards from salvation to God in Romans 10, he says those “who call on the name of the Lord shall be saved” (verse 13).  He then asks rhetorical questions, “How can they call on Him in Whom they have not believed?  How can they believe in Him of Whom they have not heard?  And how can they hear without a preacher? And how can they preach unless they be sent?” (verses 14-15).  He points out that preaching alone didn’t save people, then quotes Isaiah, saying “Who has believed our report?” (verse 16).  That word “report” is important to remember.

We all know the next verse: “So then faith cometh by hearing, and hearing by the word of God.”

But did you know that this isn’t actually what the verse is supposed to say?  The word “report” in verse 16 is a noun.  It is a message, something delivered to people.  The word “hearing” in verse 17—in the original—is the EXACT SAME WORD.  That’s right, it is supposed to be a noun, not a verb.  Not only that, but there’s another word in the Greek that isn’t in most English translations—the word that means “the.”  Literally, this verse reads:

“So then the faith comes by (our) report, and (our) report (comes) from the declaration of God.”

Romans 10:17, instead of being designed to show a step in the plan of salvation, is stressing the origin of the message that saves: the faith (see Jude 3) comes from the message we preach, and that message comes from God.

(Note: the Modern Literal Version, and Young’s Literal Translation both make this point clear in their translations)