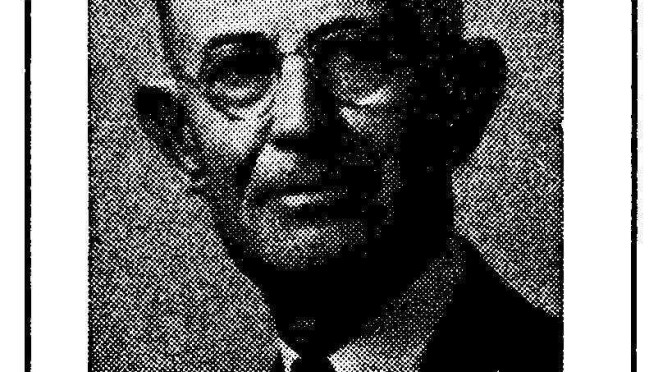 Taken from the pages of the upcoming “Studies in the Scriptures: Romans, Galatians, Ephesians, and Philippians,” we present to you the autobiography of R.C. Bell.

On a farm near Bell Buckle, Tennessee, I, Robert Clark Bell was born, March 20, 1877. My father, S. A. Bell, Sr., was of Scotch Irish and my mother, Sally Catherine Hoover, of Pennsylvania Dutch descent. I inherited a sound bodily construction and a mind of quiet, studious bent rather than of the quick, brilliant type. As my parents were both faithful members of the church when they were married, I went to church regularly every Sunday from babyhood.

As indicative of my natively serious autumnal, rather than of gay vernal temperament, the first reading I did of my own choosing was a page, colored by pious thought and feeling, entitled, “Home Reading” in the Gospel Advocate, a paper that came into our home every week. (This page was long since discontinued, but the old man is grateful that the boy had a chance to read it.) I came into the church at fifteen years of age, during a meeting conducted at Fosterville, Tennessee, by E. A. Elam. At the close of this meeting, Brother Elam asked those who had just been baptized if they were so disposed, to promise, by reading three chapters on week days and five on Sundays, to read the entire Bible within a year. I promised, and for three consecutive years read the Bible through yearly, according to this plan.

At the age of eighteen years, I entered the Nashville Bible School, Nashville, Tennessee, to alternate for five years attending this institution and teaching in the rural schools of Tennessee. Under the influence of David Lipscomb and James A. Harding, I soon saw that Paul’s description of some who would hold a form of doctrine, but deny its power, fit me. Especially, Brother Harding’s living, magnetic, contagious faith in God as a real personal friend matched the wavelength of my spirit. I slowly enough imbibed his enthusiasm for God’s fatherly care of individual Christians, for Christ’s brotherly sympathy and fellowship with them, and for the empowering Holy Spirit’s residence in them. In other words, for Brother Harding’s conception of Christianity as a “divine-human encounter,” in which spiritual communion between God and man, the sweetest of human experiences, was enjoyed.

I gradually came to realize, however, that the spiritual power of the church was contingent upon the actual personal presence and working of the triune God in and through Christians. More and more the conviction grew on me that Brother Harding’s interpretation of Christianity, which was Paul’s too, was needed to save the church from being merely a human organization with a formula to follow, a prayer to recite, and a dull, demagnetized program to render; with professional preachers in her pulpit mechanically saying dead words detached from the living realities of which they spoke, dealing in trite moralizings, threadbare platitudes, and heartless preaching about the heart and passion of Christ. This kind of a church instead of being the divine organism, instinct with the life and power of God, as designed by her Founder! In short, Brother Harding’s interpretation was needed to save the church from changing divine dynamics to human mechanics.

This fuller understanding of revolutionary Christian truth began to turn my “world upside down,” and to open up for me a new world of worship, of work, and of values in general. Consequently, when Brother Harding started another Bible school at Bowling Green, Kentucky, to be known as Potter Bible School and asked me to become one of his teachers for the fall of 1901, I, believing that God was guiding, eagerly accepted. Thus, began my half-century of teaching Bible in our Christian schools. Every member of Brother Harding’s faculties was expected to teach at least one class in Bible daily. Four happy years were spent at Potter. Bessie Sparkman of Era, Texas, who had been a classmate at Nashville, became my wife September 24, 1902. As sweethearts at Nashville, we, as only young people can, together accepted the view of Christian life and work that has continued and bound us together as “God’s fellow-workers.” All these years, we have never doubted God’s will for us was being fulfilled and that in such school work we could best serve ourselves, our fellow-men, and our God, the maker of us all. Each of our three daughters is a graduate of a Christian college.

By the fall of 1905 J. N. Armstrong, R. N. Gardner, and I (three teachers at Potter), and B. F. Rhodes (a student at Potter from Kansas), were ready, with evangelistic fervor, to open a Bible school west of the Mississippi River at Odessa, Missouri, to be known as Western Bible and Literary College. After four years, Armstrong, Rhodes, and I went to Cordell Christian College, Cordell, Oklahoma. Both of these schools, as such, have long since ceased to operate, but their influence lives on. For instance, how many native Africans will be saved eternally because these unpretentious schools lived, no man can know. The Scotts, the Reeses, the Shorts, and the Lawyers (three of these families have already furnished two generations of workers in Africa), some of our first American missionaries, all came through these schools.

My work in Thorp Spring Christian College, Thorp Spring, Texas, began in the autumn of 1911. After five years with this school, I saw that with the constantly rising educational requirements for teachers, my continued teaching in our schools demanded an academic degree recognized as standard by the ac-crediting agency for colleges. Therefore, I went to Sherman, Texas, to preach for the old Walnut Street church a year and to do enough college work in Austin College to standardize the B.A. degree, received at Potter years before. The next year was spent in Southern Methodist University, Dallas, Texas, working out the M.A. degree. Then, I returned to Thorp Spring for a year’s teaching. During this last year at Thorp Spring, I first met, as a member of my freshman English class, Don H. Morris, now president of Abilene Christian College.

I became a member of the faculty of Abilene Christian College, Abilene, Texas, in September, 1919. Twenty-five of the thirty-two years intervening between then and now, were spent teaching in this college. Of the remaining seven years, one year was spent in Harper College, Harper, Kansas, two years were spent in Harding College, Morrilton, Arkansas, before it moved to Searcy, and the other four years in David Lipscomb College, Nashville, Tennessee. Fifty years of teaching Bible in eight different schools, located in seven different states is not such a hodgepodge as it may seem at first thought. In the first place, halt of the time was spent in Abilene Christian College. More important, the fifty years, in reality, is all of a piece like a tree. Its general purpose, direction, and objective remained unchanged throughout.

Some old men regret the choice they made in youth of their life work. I am so far from such regret that were a second life to be lived on earth, I should be most happy to have an open door into such work for another long life through. I even like to toy with the fancy of living it all over again just for the privilege—I say, not duty—of teaching God’s word and of making a new generation of Christian friends. I should labor to do the same work, only with purer motives. That is, without personal ambition, without pride of human recognition and position, and without envy of others; and with more diligence, patience, kindness, hope, and love. In brief, with less flesh and more Spirit; with less self and more Christ.

And now that the sail is reefed, I shall take things a bit easier, and, being somewhat lifted o’er the strife of life, shall live the remainder of life’s book as God turns the pages, remembering in grateful thanksgiving and prayer the men and women who helped me as I helped them, and the friends I have made and kept through the years who are still bound to the whirl of the wheel of life. And, since such friends are too good to lose, I shall, in mellow musing, dream of greeting them again in the future life with God, as friends, “lost for a while” recovered; and therefore a little different from the host of stranger-friends from many races, times, and climes whom I shall meet in heaven for the first time. Is it not a great and blessed thing to be able to view the eventide of life here as a resting time, “Ere I be gone once more on my adventure brave and new” in the hereafter, somewhat as the period for tired football players between halves? One life—first half lived on earth and the second half in heaven. “Thanks be to God for his unspeakable gift” in Christ.

“Grow old along with me!
The best is yet to be,
The last of life, for which the first was made.
Our times are in his hand
Who saith, ‘A whole I planned’;
Youth shows but half. Trust God; see all, nor be afraid!”