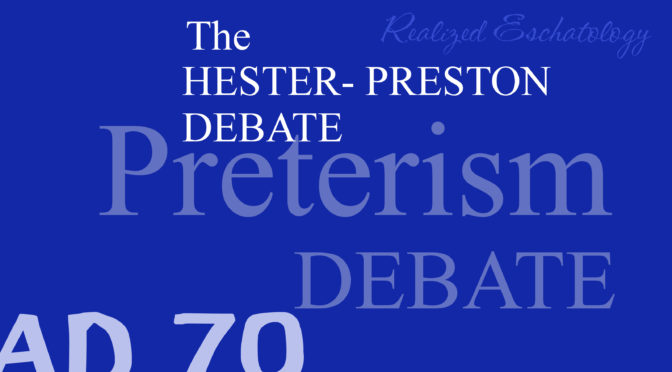 Yesterday, we gave a very brief review of our impressions from the first night of the Hester-Preston debate, when Don Preston affirmed that the final coming of Christ and the resurrection of the just and the unjust took place in AD 70.  Today, we will review the second night, when the roles were reversed.

(note: as stated yesterday, a much fuller review, complete with quotations and specific arguments will appear in the first issue of the Quarterly).

Proposition 2: The Bible teaches that the Second (final) coming of Christ and the attendant resurrection of the just and the unjust, is yet future, and will occur at the end of time.

David Hester opened the evening’s discussion by clearly defining his proposition and then giving 23 numbered arguments for why the resurrection could not have taken place in AD 70.  I thought some of them were powerful and worth consideration, and a couple of them I would have suggested he leave out.  He spent a decent amount of time speaking about the Lord’s Supper, which was to show the death of Christ “until He comes,” pointing out that if Jesus came in AD 70, then the Lord’s Supper really doesn’t show anything at all anymore.

In his second speech, Hester requested that Preston answer the arguments given instead of “rehashing” things from the night before, since this was a new proposition.    He also showed some examples from the Bible that disproved one of the Greek arguments that was made, while also spending much time affirming that while the time of the destruction of Jerusalem was known by Jesus and the apostles, the time of the final judgment and resurrection was not.

Preston, in reply, argued his points again (except for that Greek argument), emphasizing that his arguments from the night before, while not specifically answering each detail of Hester’s 23 arguments,  were sufficient to disprove them.  He also spent a good deal of time giving arguments against the idea that the apostles didn’t know when the second coming of Jesus would be (specifically John 16, “He will guide you into all truth).

David Hester spent around half of his final speech quoting translations and recognized Greek scholars in regards to the Greek word “mello,” which Preston says means “about to” and stresses imminence.  He also reiterated some of his previous arguments and gave Acts 1:7 as proof that the apostles weren’t privy to the time of the final coming of Christ.

The final speech by Don Preston covered a lot of the territory from earlier speeches, and he re-emphasized some of the points from the previous night which Hester didn’t really address.  Some of these points demand examination and study, and I wish Hester would have gotten to them.  But like we said in yesterday’s post, there was so much information put out there that it was pretty much impossible to deal with all the lines of argumentation that was given.  This is the same situation that Don found himself in on the second night.  Though I think he could have done more to answer the specific 23 arguments given by David Hester, there really wasn’t enough time in the debate to devote to answering each one specifically.  He did make a strong point that David didn’t show a passage that referred to “the end of time.”

Because of Hester’s understandable, structured presentation of the material, and Preston’s lack of specific answers to 80% of the arguments put forth, our impression is that the proposition affirmed by David Hester was successfully defended.

Again, as we said before, there wasn’t time to sufficiently cover each argument, but there was opportunity to deal with more than four of them, which we believe would have been a better use of Preston’s speeches.

Having said that, Preston did offer some evidence in his rebuttal speeches that deserves further study.  But these were not sufficient in and of themselves to successfully negate the proposition being argued.

Both men were very passionate about their position, and would occasionally get loud and point fingers.  But it was conducted in a very dignified manner, and both men were engaged in a friendly conversation afterwards.

The two men are considering debating again in Alabama at some point in the future, if proper arrangements can be worked out.

If you hadn’t heard, there was a debate this past Thursday and Friday in Ardmore, OK.  The Cobb Six made the two-hour trip to be in attendance, so what you’re about to read is a review from an eyewitness.  We had some other friends who made the trip (and came from a lot further than we did), and after talking with them, our impressions were, for the most part, the same as theirs.

As is normally the case after a debate, both sides are claiming victory, saying that the other side couldn’t handle their arguments.

Note: this is a brief review.  A much fuller, detailed treatment of the topic (with specific arguments and quotations) will be appearing in the first issue of the Quarterly.

Proposition 1: “Resolved: The Bible teaches that the Second (final) coming of Christ and the attendant resurrection of the just and the unjust, occurred at the time of the fall of Jerusalem in AD 70.”

This topic was supposed to be the subject of debate the first evening.  Don Preston opened the debate with a 30-minute talk that covered a LOT of ground (he spoke faster than most anyone I’ve heard during his first speech).  He made several points that I thought were interesting and worthy of further study, but unfortunately, there was no real structure, and he neglected to define his proposition, which made his opening argument confusing.  He also made several connections between passages, but didn’t stop to show us why they should be connected–and at the speed he was talking, it was impossible to write all the passages down.

I spoke with a friend of mine who agrees with much of what Don teaches (having watched and listened to many of Don’s lessons), and he said that he gave it a 7 out of 10.  But then he said, “unfortunately” it was “probably a 2 out of 10 for someone who never heard [of] Realized Eschatology before.” (note: Realized Eschatology is another name for preterism).  In short, it was as though Don was talking only to those who already agreed with him, and not to try to show others why preterism should be preferred.

David Hester had a difficult time following Don’s first speech, because without Don defining the proposition, there was no real basis to start from.  So, David spent most of his time showing that the Law of Moses ceased being valid when the kingdom came into existence at Pentecost (Don takes the position, if I understand correctly, that the Law of Moses was still valid and in force until Jerusalem was destroyed).  While he made some excellent points that deserve consideration, this issue isn’t directly connected to the proposition.

The second set of speeches by both men followed pretty much the same pattern, except that Don slowed down tremendously in his speaking.  Each side said that the other was avoiding or misrepresenting their arguments.

Prior to the debate, Don had sent David several questions, and then used David’s answers as part of his speech, with a “David vs. Paul” theme.  While this was interesting (and David did some clarifying of his answers in his response), Don was trying to “negate” what David had answered instead of “affirming” the proposition at hand.

The final speeches of the night were very similar to the second ones in their emphasis.

All in all, we were disappointed with both sides of the debate the first night.  Don never defined his proposition (he would say the next evening that it was a waste of time to define it), and didn’t really deal much with the “resurrection of the just and the unjust”; and David’s responses also didn’t really touch the proposition either, and instead of answering many of the arguments Don put forth on various passages, David spent his time in a thorough attack on just a couple.

Neither side could claim a definitive victory, because the specific proposition itself wasn’t the focus of either side’s speeches.

(note: Many of Don’s arguments might have been supplementary to his position, but it was never brought together to show “this is how it all fits together to prove my proposition”).

The debate itself can be viewed online here.

Tomorrow we will give a brief review of the second night of the debate.