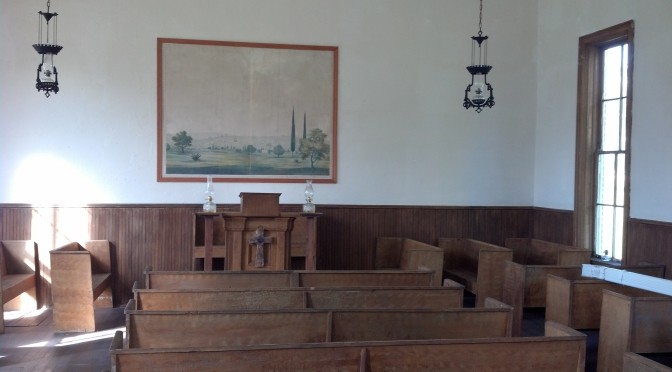 Yes, you read the title right.

Being brought up by godly parents, and being raised to respect Jesus Christ are wonderful things.  Without them, I don’t know if I would be a Christian–let alone a preacher–today.

But being raised in the church also presents several dangers.  These are dangers that you must take seriously, otherwise your child will most likely be one of the thousands who “leave the church” once they move out of the house.

A child is taken to church each time the doors are opened, and is in Bible class from a young age.  But what happens when that child is at home? Let me share with you what happens in the lives of many (perhaps even most) of these children’s lives.

That child comes home and never hears the Bible mentioned.  He rarely, if ever, sees other Christians come to his house (except perhaps some of his relatives).  In short, he sees his parents as hypocritical.  They go to church and are “part of the group” on the Lord’s Day, but the rest of the time, they are no different than anyone else.

Now, perhaps you might think “hypocrite” is a strong word to use.  Let me say it some other way that maybe will make sense:

If your children don’t see you as a Christian throughout the week, what you do on Sunday isn’t going to convince them.

And they will subconsciously decide that being a Christian isn’t really all that important.  And they will either leave or become someone who simply takes up space in the auditorium.

Being someone who was raised “in the church,” I say this from my own experience.  When I was baptized in my younger years, I didn’t view myself as a bad person.  I was already praising God during the worship times.  I was memorizing my memory verses for Bible class.  I listened to the sermons most of the time.  I could tell you the plan of salvation.

In short, there was not really any change in my life from what I did before to what I did afterwards.  I knew I needed to be baptized, but there really wasn’t anything for me to change in my life.  I’ve discussed this with others who were raised in the church, and most of them have described a similar situation.

I think this, more than any other reason, is why so many people are “rebaptized” later in life.  They can’t remember agonizing over how utterly sinful their lives had been before being baptized because they were acting just like all the Christians, just without being one.

A Lack of a Personal Faith

When children are raised in the church, they often take on their parents’ faith by default.  As in, they are told what is what by their parents, or by the Bible school teachers and the preacher.  They simply accept that this is the way things are, and instead of coming to a knowledge of the truth themselves, they start living on an inherited faith.

When someone grows up in the church, they often live on an inherited faith.  And later in life, if their faith is challenged, it can fall apart because it wasn’t really their faith.

I had a disagreement with one of my instructors in school about this very topic.  I told him that I envied the ones who were converted fresh, brought to Christ out of the world or from denominations, because for them it was a true life-changing decision.  They knew where they were and they knew what they were leaving behind.  Their faith was absolutely a personal faith.

A Lack of Zeal for the Lord

Tying in with the idea of an inherited faith, children who grow up “in the church” often have a lack of zeal for the Lord once they grow up.

Why is this? Part of it has to do with having an inherited faith.  You’re not likely to be zealous about defending someone else’s beliefs.  You might say, “But those are my beliefs too!”  Then if that is truly the case, you’ll be defending your beliefs.  But unless you’ve decided for yourself (making it a personal faith)  that your parents got it right, you’re not likely to be a zealous defender of what they believe.

Part of this lack of zeal can also be attributed to the lack of seeing Christianity lived out in their parents’ daily lives.  If it’s not important to the parents, the child isn’t going to think it’s very important either.

A Misguided Zeal for the Lord

Some folks who are raised in the church have an ego complex because they are raised with the “we are right and everyone is wrong” teachings.  Then they get to thinking that they are so much smarter in the Bible than anyone else.  Or worse yet, they think everyone outside the church is dishonest with the Bible.

The importance of baptism is so obvious!  They just ignore the parts of the Bible that they don’t like.

And I can speak from experience (and others’ testimony backs it up) that when you’re raised in the church, there is a danger of being overly critical of even our own brethren.  It was ingrained in my head long ago that people who use one cup during communion are lost because they are “binding where God doesn’t bind.”  I fully believed at one point in time that we must actively fight anything that went against “what we’ve always done.”  Why?  Because that’s what I heard talked about.

In short, being raised in the church presents the very serious danger of being a heretic hunter and and a spiritual egomaniac who thinks he’s better than “all those lost people.”

What is the Solution?

The answer to this question is not easy, but it is worth it if you care about your children and their eternal soul.

All the church programs, youth activities, and Bible classes in the world won’t have the same impact on your kids as seeing Christ lived out in you.

If you want your children to have a true zeal for the Lord and a love for the lost, then they need to see that in you.  They don’t need to see condescending attitudes towards lost people whom God made in His own image.  They need to see compassion and patience towards people who were raised in denominations who struggle with changing from what they were raised with.  Most denominational people aren’t intentionally ignoring certain Bible passages–they are simply going by what they’ve always heard and been taught.

But finally, we need to teach our children not just what to believe and do, but why.  The overwhelming majority of kids raised “in the church” can probably tell you that instrumental music is wrong, but they couldn’t explain why they believe that.  Without that crucial why component, their faith will fall apart.  They won’t be able to prove it to others, and that will cause them to realize they can’t really prove it to themselves.

Are your children’s lives worth the work to you?