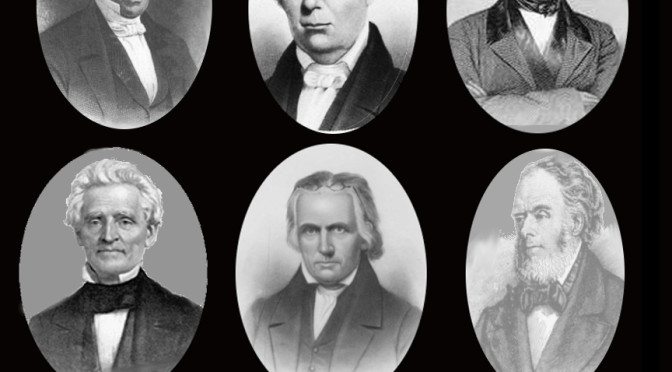 Since we’re still away, we’ve decided to give you some more special freebies!

Our most popular book each and every month is Sketches of Our Pioneers: a Brief Restoration Movement History.  So, this week, we’re going to post some of the twenty chapters contained in it.

This co-laborer of Alexander Campbell was born at Port Tobacco, Md., December 24, 1772. He was the son of John Stone and Mary Warren. When he was very young his father died, and his mother moved to Pittsylvania County, Virginia, in 1779, during the Revolu­tionary War. General Greene and Lord Corn­wallis fought at Guilford Court House, N.C., about thirty miles from his home, and young Stone heard the roar of their guns. He at­tended school for four or five years, and re­ceived instruction in the simpler branches. He was a great reader, but could get but few books. Religion was at a low ebb following the war; the Bible was little read, the Lord’s day was given to pleasure, and the houses of worship were deserted. Then came the Bap­tists into that region, and young Stone was greatly impressed by the scenes he witnessed at their revivals. People claimed to be de­livered from sin by dreams, visions, voices or apparitions, or the actual sight of the Savior. “Knowing nothing better,” he tells us, “I considered this to be the work of God and the way of salvation.” These preachers had a way of affecting their hearers by a “singing voice” in preaching.

Following these came the Methodists, who were very plain and humble, but zealous men, and were warmly opposed by the Baptists, who represented them as “the locusts of the Apocalypse” and warned the people against them. Young Stone’s mind was much agi­tated by their conflicting teachings. He had an earnest desire for religion, and often retired in secret to pray, but, ignorant as to what was required of him, he became discouraged, and joined in the sports of the time.

February, 1790, he entered Guilford Acad­emy, North Carolina, worked hard, lived on milk and vegetables, and allowed himself only six or seven hours out of twenty-four for sleep. There was great religious excitement at the time, and many of the students united with the Presbyterian Church. This was distasteful to him, and he determined to leave the institu­tion, but a little circumstance changed his plans. His room-mate asked him to go with him to hear the preacher. The sermon so im­pressed him that he resolved to become a Christian. For a year he was tossed on the waves of uncertainty, laboring, praying, and striving to obtain “saving faith,” sometimes desponding and almost despairing. The com­mon doctrine was that men were so totally de­praved they could not believe, repent, and obey the gospel; regeneration was the im­mediate work of the Holy Spirit, and now was not the accepted time, but the sinner must wait.

While in this state he heard a sermon on the words, “The Sacrifices of God are a broken Spirit.” It described his condition, and hope sprang anew in his breast. But another ser­mon on “Weighed in the Balances and Found Wanting,” cast him down as profoundly as before, and his days were full of sighs and groans. Still another discourse, on “God is Love,” gave him great comfort, and he found his way to peace.

He was very poor. He could not secure sufficient clothing. But he passed through the Academy, and in 1793 became a candidate for the ministry. The particular subjects assigned him for study were the Trinity and the being and attributes of God. “Witsius on the Trinity” greatly confused him, and before he was licensed he became so unsettled by the doctrines presented that he determined to give up the idea of preaching. Early in 1795 he went to Georgia and became teacher of languages in a Methodist school near Wash­ington. In the spring of 1796, however, he returned to North Carolina, and was licensed to preach. He preached for a time in Wythe County, Virginia, and then journeyed into Tennessee, preaching at Cumberland. The Indians were still in this region, and he had several narrow escapes from them. In 1798 he was regularly ordained pastor of Caneridge and Concord churches, Bourbon County, Ken­tucky. Knowing he would be required to adopt the Confession of Faith, he determined to examine it. This was the beginning of sor­rows. The doctrines of election, reprobation, and predestination, and of the Trinity as set forth in that instrument, he could not accept. When the Presbytery put the question, “How far are you willing to accept the Confession?” he answered, “As far as I see it consistent with the Word of God,” and on that statement they ordained him.

His mind was constantly tossed on the waves of speculative theology, the all-engrossing theme of that period. “I believed and taught,” he declares, “that mankind were so totally de­praved that they could do nothing acceptable to God till his Spirit, by some physical, almighty and mysterious power, had quickened, en­lightened, and regenerated the heart, and thus prepared the sinner to believe in Jesus for sal­vation. Often when addressing listening mul­titudes on the doctrine of total depravity, their inability to believe, and the necessity of the physical power of God to produce faith; and then persuading the helpless to repent and be­lieve the gospel, my zeal would be chilled by the contradiction. How can they believe? How can they repent? How can they do im­possibilities? How can they be guilty in not doing them? Wearied with the works and doctrines of men, I made my Bible my constant companion. I earnestly, honestly, and pray­erfully sought for the truth, determined to buy it at the sacrifice of everything else.”

In 1801 he was led “out of the labyrinth of Calvinism and error into the rich pastures of gospel liberty.” He preached from Mark 16:16 on the universality of the gospel and faith as the condition of salvation, and urged sinners to believe now and be saved. His con­gregation was greatly affected. He tells how religious excitement ran high at this time. In the revivals scores would fall to the ground pale, trembling, speechless. Some attempted to fly from the scene panic-stricken, but either fell or returned to the crowd, as if unable to get away. An intelligent deist approached him and said, “Mr. Stone, I always thought you an honest man, but now I am convinced you are deceiving the people.” “I viewed him with pity, and mildly spoke a few words to him. Immediately he fell as a dead man, and rose no more till he confessed the Saviour.”