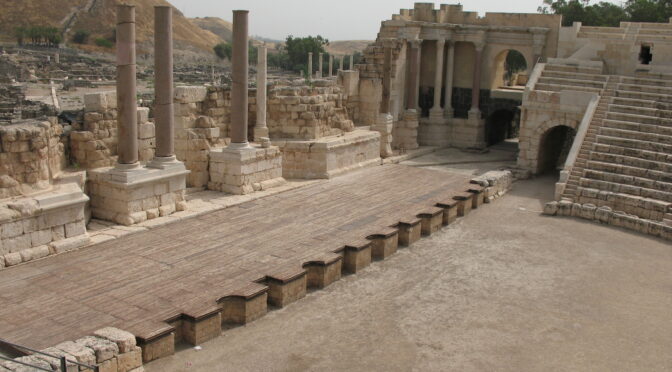 (1) The elder unto the elect lady and her children, whom I love in the truth; and not I only, but also all they that have known the truth;

The apostle John here does not identify himself by name. This follows the pattern laid out in the other writings which we call by his name (the Gospel of John, I-III John). Instead, he refers to himself as “the elder.” Some have taken this to mean John was old when he wrote this letter. In the first century, people were considered “aged” when they were in their 60s (see Philemon, verse 9). It is also possible John means he holds the office of an elder. He was, after all, a pillar of the church in Jerusalem (Galatians 2:1, 9). Peter, who was also mentioned as a pillar in the church in Jerusalem, later called himself “an elder” (I Peter 5:1). While it may indeed reference the age of the apostle, we should not ignore that John may have been an elder in the church in Jerusalem and identified himself as such.

The Elect Lady and her children

“The elect lady” has been the subject of some debate over the years. Who exactly is this elect lady? Is she a literal woman? Or is it a figurative way of describing the church? The most prominent possibilities, along with the pros and cons, are listed below.

Possibility #1: The elect lady is Mary, the mother of Jesus. This option obviously assumes the “elect [literally “chosen”] lady” is a literal woman. Mary was indeed chosen by God to be the mother of Jesus (Luke 1:26-28). First, given the timeframe of writing (67-69 AD), Mary would be over 80 years old if she is still alive at all. Secondly, John had taken Mary in as his own mother according to Jesus’ wishes from the cross (John 19:26-27), so it seems strange that he would write a letter to someone he was caring for. Also, John mentions everyone who has known the truth loves both her and her children. One would be hard pressed to prove everyone who became a Christian even knew about all of Jesus’ brothers and sisters, let alone loved them. It is unlikely Mary is the one under consideration.

Possibility #2: The elect lady is some prominent Christian woman who John knew in the first century. Some say her name was Kuria or Kyria (the Greek word translated “lady”). Some have pointed out Kuria is the Greek form of the Hebrew name “Martha” and suggest that as her name. It is difficult to believe some woman, unknown to us today, could be so prominent that every single Christian not only knew of, but loved her and her children. If such a woman existed, she and her children surely would have been mentioned in Scriptures.

Possibility #3: The elect lady is the bride of Christ, the church (Ephesians 5:25). In this understanding, the children would be the members of the church. In the Old Testament, Jerusalem was often pictured as a woman (Jeremiah 3:1 Ezekiel 16:30-32), and the inhabitants were described as her children (Joel 3:19, Jeremiah 3:14). The church is the New Jerusalem (Revelation 21:9-10), so it makes sense if the church is referred to as a lady and her inhabitants as her children. Every single person who knows the truth should love the church (collectively) and the members (individually). Opponents of this view point to the “children of thy elect sister” (verse 13). This leads us to the next option.

Possibility #4: The elect lady is an individual congregation of the Lord’s church. Her children, then, would be the members of that congregation. The question, then, would have to be, “What congregation was so well-known John could say every single Christian loved it and the members thereof?” Some have suggested the church in Jerusalem, with the apostles as members, would fit the bill. Others suggest the mission-minded congregation at Antioch. Still others suggest Ephesus. This would also help to explain John’s closing statement, “the children of thy elect sister greet thee” as being the congregation with whom John was worshiping. If one specific congregation is under consideration (and it seems to be the case, because John wishes to speak to them face to face), it is impossible to know exactly which one it is without knowing where John was writing from.

We should take great comfort in knowing God has made His truth available through His word, the Bible. God wants us to know the truth. God made it possible for us to know the truth. That should give us great cause to rejoice! On the opposite side of the coin, however, it also places a responsibility upon us to seek the truth, read the truth, and obey the truth. Jesus said, “Seek and ye shall find” (Matthew 7:7). The truth is not going to just magically get zapped into your head. You have to actively look for it in God’s word.

But as you seek for God’s truth in His word (John 17:17), you can rest in confident assurance—knowing the truth is possible!

(2) For the truth’s sake, which dwells in us, and shall be with us forever.

For the truth’s sake

It is for the sake of the truth (or because of the truth) that all Christians should love the church (as a whole) and the members thereof (individually). Because Christ died for all of us, purchasing the church with his own blood, we should place great value on each Christian as well as the church itself as an entity.

The truth is God’s word. Specifically, John has reference to the gospel of Jesus Christ. The truth is to be obeyed (Galatians 3:1). It includes those things placing one into Christ (faith – Hebrews 11:6, repentance – Acts 2:38, and baptism – Romans 6:3). But also, it includes those things which one must continually do after becoming a Christian. Stated concisely, the truth is the commands of Jesus Christ which must be followed from the heart and which will result in a home in heaven. The commands are all summed up in the phrase, “walk in the light” (I John 1:7).

The truth dwells in us. At least it should. Since we have accepted the Bible as God’s word, we should constantly read it and apply it to our lives. The apostle Paul said, “let the word of Christ dwell in you richly” (Colossians 3:16).  When people cease reading and applying the Scriptures to themselves, they slowly slip away from being the follower of Christ they should be. Eventually they may find themselves one day completely away from Christ with no idea how they got there. Most people don’t get up one morning and decide, “I’m going to quit being a Christian.” Usually it is a gradual decline. That is the reason Paul reminded the Corinthians to “examine yourselves, whether you are in the faith” (II Corinthians 13:5). Later on in this very book, John stresses the need to “look to yourselves” (II John 8).

Truth…shall be with us for ever

Truth is eternal. John says the truth shall be with us forever. There will never be a time when God’s word does not exist and apply. Jesus said heaven and earth would pass away, but his words would not pass away (Matthew 24:35).

(3) Grace be with you, mercy, and peace, from God the Father, and from the Lord Jesus Christ, the Son of the Father, in truth and love.

This was the common Greek form of greeting during the first century. It was a wish of favor upon people. It is similar to saying, “good morning.” We may not think of it much, but we are wishing favor upon people when we say that. Grace is getting something good we don’t deserve or haven’t earned. Generally grace is described as “unmerited favor.”

This was the common Hebrew greeting. It is the word Shalom (or Salom, or Salem). It was common for Hebrews to include a wish of peace to those they met or corresponded with. This word was integrated into various names in the Old Testament.  Melchizedek was called the “King of Salem, which is, the King of Peace” (Hebrews 7:2). Jerusalem was originally called Jebu-Shalom, or “the peace of the Jebusites” who originally lived there. Absalom and Solomon both have this word as part of their names.

Like Paul, John wishes the blessing of mercy upon those he writes to. Mercy is not receiving the bad things one deserves. In court cases, someone who is guilty may beg for the mercy of the court. That means, “Don’t give me what I deserve, please!” If we all got what we deserved, we’d all be struck dead like Ananias and Sapphira (Acts 5:1-11).

From God the Father, and from the Lord Jesus Christ, the Son of the Father

While Grace and peace were common greetings, John doesn’t give them their common meaning. Instead, John is clear to say he was wishing them the grace, mercy, and peace that only comes from God the Father and His Son, Jesus Christ. Therefore, John wishes God’s favor upon them. John wishes the mercy of God upon them. John wishes the peace of God upon them (see Philippians 4:7). The only source of true grace, mercy, and peace comes from the Father through the sacrifice of His Son.

John also makes a point to show the deity of Christ as “the Son of the Father.” Some religious groups (most notably the so-called “Jehovah’s Witnesses”) claim since Christ is the “Son of God,” He can’t be God, or be deity. However, He’s also the “Son of man.” Does that mean Jesus wasn’t a man? Of course not! The son of a human is a human. He will share completely in the nature of being human. The Son of God is also God, deity. The Son of God will share completely in the nature of being God.

In truth and love

As can be seen throughout this short letter, John emphasizes the importance of truth. This verse makes it very clear that the grace, mercy, and peace of God are found inside truth and love. Outside of the truth, these blessings of God cannot be found. Since the truth is to be obeyed (Galatians 3:1), these blessings cannot be found outside of obeying the truth. Ephesians 1:3 tells us all spiritual blessings are “in Christ.” That means there are no spiritual blessings outside of Christ. Jesus Christ is the author of eternal salvation to all those who obey him (Hebrews 5:9).

John goes on to say in this letter that love means keeping the commandments (II John 6). Some people wish to claim Jesus without following His words. They claim to love God, yet they live their life as though God doesn’t matter. Jesus said, “This people…honors me with their lips, but their heart is far from me” (Matthew 15:8). John, in this verse, makes it clear: love and truth are interconnected. And without both (the love of God and following the truth), there is no grace, mercy, or peace to be found.