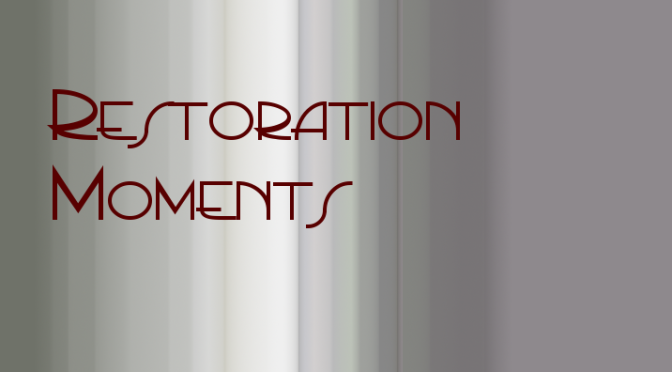 Read almost any book that gives an overview of the Restoration Movement, and you’ll find the names of Abner Jones and Elias Smith mentioned.  You’ll find Barton W. Stone, Thomas and Alexander Campbell, and Walter Scott.  And the idea that you will get from reading these books is that they all joined into one, big, happy movement.

Well, that’s not actually true.  You see, Abner Jones (in 1801) and Elias Smith (a few years later) started preaching that all creeds and human names should be eliminated in favor of simply the Bible and the name Christian. The group of congregations were known as the Christian Connexion or the Christian Church.

Barton W. Stone started teaching the same thing around that time.  In fact, letters were exchanged between the body of people whom Stone had converted to Christ and those who had been converted by Jones and Smith, with the result being that they united with each other.

Still so far, so good.

When Alexander Campbell came on the scene, he began to plead for the Bible only, and a rejection of human names and creeds and practices.  Walter Scott was very evangelistic in spreading this freedom from denominational slavery to the people.  And then, in 1832, the “Christian Church” that Barton W. Stone had been building up united with the ones calling themselves “disciples.”

Well, not really. It happens that the folks back in New England (the Christian Connexion, with Abner Jones and Elias Smith) weren’t too thrilled with Mr. Stone’s “defection.”  In fact, years later, their official narrative was that Barton W. Stone never joined with the disciples.  (No joke–in 1919, they even published an official booklet called “Rev. Barton W. Stone: Did He Join the Disciples of Christ?” just to promote their revisionist perspective).

The New England Christians were extremely upset because (1) Alexander Campbell argued for the use of the descriptive name “Disciples” as being “more ancient” and appearing more times in the New Testament to describe followers of Christ than “Christian.”  And (2) most of the “Christian Church” preachers taught that baptism was a good thing to do in obedience to Jesus Christ, but that it wasn’t essential–putting them at odds with the preaching of the disciples (and the Bible).  This second item was not the official stance of the Connexion until 1824, when they gathered for a conference and voted to “receive to conference membership, churches even though they did not observe the ordinance of baptism, provided such churches did not object to having the ordinance observed in the church.” (as reported in the Herald of Gospel Liberty, June 16, 1910, page 758 [page 22 of that issue])

While many of the Christian Churches merged with the disciples (often just going by the name “church of Christ”), there were several, primarily in New England, who did not, and they broke all recognition of Barton W. Stone and the churches he planted–until some years later when they decided to reclaim him as part of their history and claim he was tricked by Campbell and was too meek and humble to ever make an issue out of it.

Even more than 75 years after the unification of Stone and Campbell’s efforts, the “Christian Connexion/Christian Church” (which by this point had set up headquarters in Dayton, Ohio) still remained bitter against the Disciples/church of Christ.  Here’s a letter printed in the Herald of Gospel Liberty, the official paper of the “Christian Church,” from January 13, 1910 (Bold font added by me for emphasis).

The recent articles in the Herald of Gospel Liberty by Bros. Cooper and Whitaker, dealing with the inconsistencies of our Disciple brethren, brought to my mind a few things which I observed while in Pittsburgh during their recent centennial (?) celebration.

In a number of the display windows of the business houses were to be seen portraits of the Campbells and of our own beloved Barton W. Stone. The official banners in evidence everywhere and the badges worn by the delegates bore a trinity of portraits of Alexander Campbell, Barton W. Stone, and Sir Walter Scott. In their various convention sessions the names Disciples of Christ, Church of Christ, and Christian church were heard simultaneously. The enrollment and assignment headquarters were in a large downtown vacant business room. In the large display window on one side of the entrance thereto, was a conspicuous placard bearing the following inscription: HEADQUARTERS
CENTENNIAL CELEBRATION
DISCIPLES OF CHRIST.

In the window on the opposite side of the entrance a similar placard bore this inscription:
HEADQUARTERS
CENTENNIAL CELEBRATION
CHRISTIAN CHURCH.

In the homes and upon the streets the chief topic of conversation was about the great “Christian Church” convention.

While riding upon the rear platform of a crowded street car, I engaged in conversation with a Disciple brother from western Ohio. I enquired as to what was going on, and being willing to impart the desired information, he told me that the centennial convention of the Christian Church was being held in the Carnegie Institute, for which place I was bound. I made inquiry as to the faith of his church and for the distinction between his church and a people of whom I had knowledge, maintaining churches in his part of the state of Ohio and who are also designated by the denominational name of Christian. Whereupon the hobby-riding brother informed me that the people of whom I spoke were really the “New Lights” and “don’t amount to much.” Well, what I said in a brief space of time could only have been taken by an expert stenographer and I fear that I should not care to have it published for it might seem to some to be void of true Christian charity.

Brethren, is it the proper thing for us to humbly suffer these “counterfeits,” these unchristian misrepresentations, this insidious usurpation of our name? It is my conviction that we should have sent a committee, or at least an authorized representative, to Pittsburgh with authority to demand—yes, demand—that one distinctive denominational name be at once assumed by the followers of Alexander Campbell and that that name be some other than the name Christian.

One Disciple minister Informed me that they are not assuming our name; that individually they are “Christians,” but collectively, denominationally, they are “Disciples of Christ.” If this be the true attitude of their church, I move that at the next meeting of the A.C.C. we put on foot some definite movement through congressional legislation, if possible, to legally compel them to take one definite denominational name and that name some other than Christian. And In the meantime, let us create a strong sentiment In our favor by following Dr. Whitaker’s advice—“Expose it”

The truth of the matter is, we have been suffering this imposition too long already. We have become so tolerant in our eagerness to maintain a true spirit of brotherly love that we have failed in our first duty of self-protection.

Now I am sure that the brethren, especially those who know me, will not feel that I have the spirit of an unscrupulous agitator. I have the greatest love and the broadest sympathy for all true followers of our Lord Jesus Christ, but I am for the dear old Christian Church, first, last, and all the time.

Through the next several years, the Christian Connexion shrank and merged with the Congregational Church in order to continue its existence.  Then later that new group merged again with another group, and they now are known by the name “United Church of Christ.”  There is an observation to be made about what name they chose and which name they ceased using…

All this to say, while Abner Jones and Elias Smith belong, historically, to the movement to restore Christianity in the United States, and their actions resulted in many people becoming simply Christians, the next generation of their preachers were divided.  Most of them insisted on remaining separate from the “church of Christ” or the “Disciples.”  They rejected baptism’s place in the plan of salvation (Jones and Smith, by contrast, placed great importance on baptism), and as such, became enemies to the cause of restoring New Testament Christianity instead of allies fighting for it.

So, when you pick up that Restoration Movement book, and you read about the followers of Abner and Elias, and how it’s implied that they all joined into one big, happy family, you’ll shake your head.

Because now you know the rest of the story.