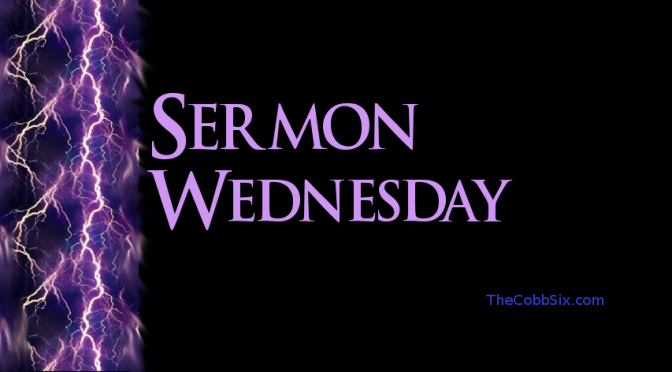 Back after a few weeks’ hiatus, we are proud to continue our series on “Fundamentals of the Faith.”  And you might have noticed that we’ve moved this feature up a day.  Instead of “Sermon Thursday,” we’ll be having “Sermon Wednesday.”

Enjoy!  And, as always, if you have any questions or comments, please feel free to let us know!

Everyone understands the difference between the Old Testament and the New Testament…right?

OK, so there’s some confusion about the Old Testament; but everyone understands the New Testament, right?

Every one of these things are said by people about the two testaments in the Bible.  To say there is confusion about the Old Testament and New Testament is an understatement.

Today, we’ll look at the two divisions of the Bible, who they apply to, and why.

What is a “testament”?

This is the same as a covenant, an agreement between two or more parties.  There are two types of covenants: suzerainty and parity (don’t worry, you don’t need to remember the names).

A parity covenant is an agreement between two or more parties of equal standing.  It’s like a business merger.  God is never involved in these kind of covenants, because no one is equal to Him.

So, when you see the word “testament,” think of the word “covenant.”

The two covenants (or testaments) were both given by God at different times.

The first covenant (the Old Testament), which is also called “the Law of Moses” (Malachi 4:4), was established by God in the book of Exodus (see Exodus 20) and includes all the commands and restrictions given in Exodus through Deuteronomy.

Exodus through Deuteronomy? What about the other 35 books of the Old Testament?

Genesis is the story leading up to the giving of the Law of Moses, beginning with creation, and going through the life of Abraham, Isaac, and Jacob (whose family is the focus of the rest of the Old Testament).

Genesis contained teachings and commands that would be the foundation of the covenant that was given (such as circumcision, tithing, animal sacrifices, etc…).  But they were not the Covenant itself.

The books after Deuteronomy give the history of Jacob’s family (the Israelites) after the Law of Moses (the first covenant) was given.  Joshua through Esther give, basically, a chronological history of the Israelites until the 400’s BC.  Psalms though Song of Solomon are writings of some of the famous Israelites mentioned in the historical books (primarily David and Solomon).

Isaiah through Malachi (the “prophets”) contain some historical narratives, but their primary focuses are (1) attempts to bring the Israelites back to faithfulness, and (2) prophecies of things that had not yet taken place including many prophecies about Christ and the church.

The new covenant (New Testament), which is also called “the Law of Christ” (Galatians 6:2), was established by God in the book of Acts (see Acts 2), and includes all the commands and restrictions given in Acts through Revelation.

But what about the gospels? Where do they fit in?

Like Genesis, the gospel accounts tell the story leading up to a covenant.  They contain teachings and commands that would be foundational to the new covenant (such as “love one another,” faith, repentance, confession, baptism, and others).

The book of Acts is a brief history of the New Covenant people (the church) from its establishment on Pentecost until around AD 62.

The books of Romans through Jude (the “epistles” or “letters”) are like the books of prophecy in the Old Testament—written with two main focuses (1) to bring Christians to a higher level of faithfulness, and to a lesser extent (2) prophecies about events which had not yet taken place (some of the epistles—like Philemon—don’t include any prophecies).

Revelation is like the epistles, except that it focuses heavily on prophecy about things which had not yet taken place when it was written, but it still encourages Christians to a higher level of faithfulness.

There are two covenants in the Bible, both given by God.

The question before us now is…

Who do the covenants apply to?

Covenants made with specific people do not apply to those outside of that group.

The covenants made between the Roman Empire and the nations it conquered do not apply AT ALL to other nations.  China, which was never conquered by Rome, was never in one of those covenants.  You may say “that’s a big bag of duh right there,” but it is important we point this out.

Covenants only apply to the people who are involved in it.

But just as clear, we must point out that covenants apply to everyone involved in it.

If Rome conquered a nation, then every single person in that nation was now involved—no exceptions.

Covenants made for or at a specific time do not apply outside of that timeframe.

A covenant is an agreement that says “from now on, this is how things are going to be.”  It only becomes enforceable when it begins—not before.  And if the covenant has a cut-off date, it is no longer effective or enforceable after that date.

It’s like a football contract: the player cannot demand that the team pay him for the years he wasn’t under contract, nor can he demand that they keep paying him after the contract has expired.

You may think that this is so obvious that I shouldn’t even bring it up, but it needs to be said because of some of the confusion about the Old Testament and New Testament.

With these things in mind, let’s look at who the old and new covenants applied to.

The Old Testament was given to a specific people.  God had established a covenant with Abraham, then Isaac, and then Jacob to give their descendants the land of Canaan (Exodus 6:4-5).  In Exodus 20:2, God announces that He is speaking directly to the group of people that He had just led out of the bondage of Egypt.

Immediately after stating who He was addressing, God gave the Ten Commandments (Exodus 20:3-17).

God never commanded that Gentiles (non-Jews) follow the Ten Commandments or the rest of the Law of Moses—it was only ever for the Jews.

This Law of Moses was not intended to last forever—it was given for a specific period of time.

God, through Jeremiah, foretold that God would establish a “new covenant” with His people (Jeremiah 31:31-34).  God specifically states in that passage that it is not the same covenant as the one He made with them when He brought them out of Egypt.

When a new covenant is made, then any old ones are no longer valid.

A football player cannot play under two separate contracts with the same team at the same time.  Only one contract is valid.  So, when this “new covenant” was made, the old one was no longer valid.

The New Testament (covenant) began on Pentecost—making the Old Testament no longer valid beginning at that point.

The only group that the Old Testament was ever binding on was the Jews, and that Testament was no longer in effect, starting on the Day of Pentecost after the death of Jesus Christ.  The Law of Christ—the New Testament—became effective beginning in Jerusalem on the same day.

It was first a covenant with the Jews only, but beginning in Acts 10 it was expanded to include the Gentiles as well.  See Romans 1:16 – I am not ashamed of the gospel of Christ, for it is the power of God unto salvation to all who believe: to the Jew first, and also to the Gentile.

There are only two groups of people in the world, so far as Jews were concerned—Jews and non-Jews (Gentiles).  The New Testament applies to both groups, therefore it is a universal covenant.  It applies to every person—none are excluded.

Those who reject it are still subject to the punishments contained in it for disobedience, for breaking the laws.

Because there is only one Covenant in force today—and it is a universal covenant –THAT is the covenant we need to be most concerned about studying.

We still read and study the Old Testament, because it helps us understand God, how He works, His actions towards His people in the past, and for great encouragement from examples of faithful followers then.  But we need to remember that the entire purpose of the Old Testament was to bring us to Christ (Galatians 3:24-27).

The New Testament is what we live under today, which is why we should focus most of all on its pages.

The New Testament says that in order to become part of God’s family and receive the blessings of the New Covenant, you have to believe in Christ, repent of your sins, and be baptized to have those sins washed away.

After doing that, the New Testament commands that we continually strive for a life of greater faithfulness to Him, repenting when we’ve messed up (Acts 8:22), and keeping our focus on heaven so that we don’t lose what we’ve worked for (II John 8).

Make the decision to obey the New Testament of Jesus Christ today!